How are Andean sovereigns responding to socio-economic volatility in a post-Covid economy?

HSBC is one of the world’s largest banking and financial services organisations. Our global businesses serve more than 40 million customers worldwide through a network that covers 64 countries and territories.

Our customers range from individual savers and investors to some of the world’s biggest companies, governments and international organisations. We aim to connect them to opportunities and help them to achieve their ambitions.

The products and services we offer vary widely according to customers’ needs. We provide individuals and families with mortgages that help them buy their own home, as well as savings accounts and wealth management products that help them plan for the future.

We offer businesses loans to invest in growth, and products such as foreign exchange and trade financing that enable them to expand internationally. And for large companies and organisations operating across borders, we offer tailored advice on decisions such as financing major projects, issuing debt or making acquisitions.

Cesar Arias is the General Director of Public Credit and National Treasurer of the Ministry of Finance of Colombia since November 2018. He is responsible for the domestic and international funding strategies, risk management programs and treasury operations of the Republic of Colombia. Cesar sits in the board of several state-owned enterprises and represents the nation in several multilateral forums and financial markets.

From 2015-2018, Cesar was the Chief Economist for Latin America in the Global Economic Research and Emerging Markets Departments of Deutsche Bank in New York. In this role, he covered the seven the largest economies in the region and teamed up with strategists to formulate trading recommendations in fixed income, foreign exchange and credit markets.

Previously, César was a Director in the Latin American Sovereigns Group at Fitch Ratings. At the ratings agency, he was the lead analyst for Central American sovereigns (Costa Rica, Dominican Republic, El Salvador and Guatemala) and South American frontier markets (Bolivia, Ecuador, Paraguay and Suriname).

From 2008 to 2011, César worked as a Research Officer in the Monetary and Capital Markets Department at the International Monetary Fund (IMF) in Washington DC. At the IMF, he conducted a stress test analysis of the Chinese commercial banks and supported technical assistance missions on debt management and capital markets development.

Previously, César served for five years as a Specialist in the Secretariat for Political Affairs at the Organization of American States in Washington DC, where he monitored ten presidential and legislative elections in Latin America.

César holds a Master of Public Administration from the School of International and Public Affairs at Columbia University and a B.A. on Government and International Relations from the Externado University in Colombia.

Ministry of Finance, Republic of Chile

Head of Public Credit at Ministry of Finance, Republic of Chile

Mr. Sepúlveda is currently the Head of Public Debt Office for the Ministry of Finance, where he has also acted as Senior Advisor since 2002. Mr. Sepúlveda obtained his BA in Commercial Engineering, concentrating in Economics, from the Universidad de Talca (Chile) and has a postgraduate degree in Business Administration and a Master of Science in Financial Economics from the Catholic University of Leuven (Belgium).

As Head of the Public Debt Office, Mr. Sepúlveda has placed bonds for over US$120 billion in the local and international markets. Under his management, the curves have been extended since 2003, issuing longer bonds. For instance, in 2012, he performed the first external issuance of 30-years and 20-years bonds locally. In 2013, he executed the first issuance of 30-years nominal bonds locally.

In 2016, he performed one of the most important LM operation in the local market (US$14.5bn), with the aim to create strong references both in UF and nominal curve. In 2017, he issued the first domestic Euroclearable Bonds for US$1.5 billion offered simultaneously to local and international investors. Additionally, in 2017-2018, he designed the structure and hired Chile’s first insurance against earthquake for US$500 million with the World Bank. In 2019, he was in charge of the first issuances of Green Bonds for the equivalent of US$2.4bn. More recently, he was in charge of the issuance of several ESG instruments, including Social and Sustainable bonds of the Republic of Chile.

Ministry of Finance, Republic of Chile

Richard Francis is a member of the Latin America Team in the Sovereign Group at Fitch Ratings, based in New York. He is responsible for a number of the sovereign’s ratings in Latin America and participates in the research initiative on sovereigns rated by Fitch in Latin America. The lead sovereign analyst covering Colombia, El Salvador and Chile, among others, Richard is also a frequent spokesperson for the group on sovereign ratings.

Prior to joining Fitch in 2016, Richard was a Director for the sovereign group at Standard and Poor’s where he covered numerous countries in Latin America and the Caribbean. Richard also worked at Morgan Stanley in the Latin American Economics Research Group.

Richard earned a BA in political science from Rice University and an MA in International Affairs from Columbia University.

Fitch Group is a global leader in financial information services with operations in more than 30 countries. Fitch Group is comprised of: Fitch Ratings, a global leader in credit ratings and research; Fitch Solutions, a leading provider of credit market data, analytical tools and risk services; Fitch Learning, a preeminent training and professional development firm; and Sustainable Fitch, the first global ESG Ratings solution for all asset classes at an entity and instrument level.

With dual headquarters in London and New York, Fitch Group is owned by Hearst.

Graham joined BlueBay in September 2013 to manage the emerging markets sovereign research team, with particular responsibility for Latin America. He became a Partner in July 2018. Before joining BlueBay, Graham was Chief Strategist at Insparo Asset Management. Prior to that, he worked for 12 years in emerging markets research at JPMorgan in New York and London, heading up Latin America sovereign strategy, CEEMEA FX strategy and Sub-Saharan Africa research. In the early stages of his career, Graham taught English in Colombia, worked as an economist for the government of Papua New Guinea, was a management consultant in London, and was Senior Latin America economist at the Economist Intelligence Unit. Since July 2020, he has been co-chair of the Investor Policy Dialogue on Deforestation in Brazil, leading engagement with the authorities. Graham has a First Class BA (Hons) degree in Hispanic Studies from the University of Sheffield, and an MA (Econ) degree in Development Economics from the University of Manchester. 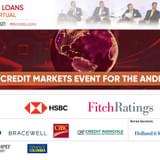 2021 04 27 - 18:15 | Andes’ transport and social development infrastructure (Healthcare, Sanitation, Housing): Who is investing and what role are bankers & infrastructure companies playing to finance these projects?

2021 04 27 - 19:00 | A new frontier in financing structures: How can private placements and private debt offerings address the needs of long-term infrastructure projects?

2021 04 27 - 17:20 | The pathway to fund Andean renewable energy projects: To what extent does growth in private energy PPAs make these projects bankable?