Sigma Alimentos, a leader in refrigerated foods with presence in Mexico, Europe, USA and Latin America, priced a €600mn private placement through its existing curve off the back of strong demand from European investors, which were eager to get a piece of the company’s first investment grade transaction and its first trade in Europe. 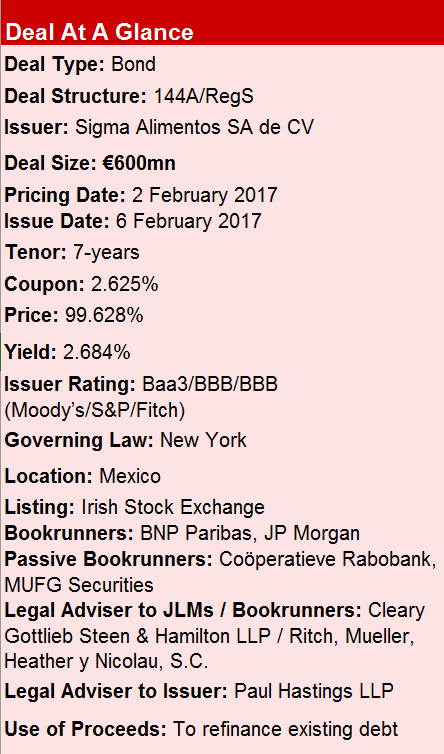 In January 2017 Sigma Alimentos sought to tap the market for a 7-year transaction in a liability management exercise aimed at refinancing existing debt and extending its maturity profile.

This led the company to successfully price a €600mn 7-year bond in the international capital markets, the company’s first bond in Europe.

Following the roadshow, the 7-year transaction was announced on 2 February at 8:30AM GMT with initial price thoughts of MS+250-262.5bp.

A strong orderbook allowed the lead managers to revise guidance, which was announced to the market at 10:45AM GMT, at MS+237.5-250bp. Following the revised guidance, the top end of the orderbook, dominated largely by European high-quality EM investors, remained more or less unchanged.

By type, asset managers scored the biggest chunk of the private placement – about 74%. Pension funds and insurers took 9%, agencies 4%, private banks 4%, and other investors 9%.

The transaction, successful on a number of fronts, has helped create a path for other Mexican borrowers – and borrowers across Latin America – into the European private placement market.